A 2 a.m. Skype call, followed by a comment to my husband, “This is going to be hard, but I know we are meant to do it”. I could feel this would take us on a journey like no other we had been through together. At the time I had no idea how right I was. You see, this would be my second surrogate journey, and my first journey was perfect, so how hard could it really be? Right?

Not long after that first Skype call, we got the ball rolling. Most people don’t realize everything a surrogate goes through to just get to that call and that first meeting. When you get the word that, “You have been matched” it’s a feeling of excitement all its own.

From the start, I did everything I could not compare my first journey to this one. After all, you try not to compare one pregnancy to the next, but for the most part, it was on track just the same. Then came the first transfer on March 16th. Everything went perfect and bedrest was not so bad. I was a pro at this point, so I planned better than I did with my first journey.

After a few days, I knew something was off. Every surrogate I know can’t wait for the blood draw, so we do home pregnancy tests to get a sneak peek in the hopes of seeing two pink lines or the word “Pregnant”. I saw nothing….but that is ok, I told myself. With my last surrogate baby, I never got a positive home pregnancy test anyway, even after the positive blood draw. So it could be just that.

On March 26th we got the news that the transfer didn’t take, and I was so confused. What did I do? Did I get up too soon? Maybe I should have rested more? Did me sneezing on the way home have something to do with it not taking? That was only the tip of the iceberg of questions running through my head, and on top of that, now what?

I had never been here before and just like that, this was no longer like my perfect journey. I was in new waters and feeling so alone. Lucky for me, I went through Rocky Mountain Surrogacy and my now amazing friend Tess, my husband Josh, and my best friend Nicole, as well as my first surrogate family, were all here for me. They helped me with the what’s next, so with their help as well as Tonya’s (our wonderful nurse at Utah Fertility Clinic), we had a plan.

It was about this time when I realized how much Kirsten and I were alike. At this point, our relationship was still so new and we all just took a big blow. But it was nice working with someone who needed a plan as much as I did. We needed answers and what we could do for the next round. At this point, I was grateful they had not given up on me and that we had some testing to do to move on, but we were still moving forward. So with that, we had the endometrial receptivity analysis test done, (also known as the “Mock cycle”) on April 27th and 29th and got the news on May 18th that the transfer failed because we missed my window, an easy fix.

With that good news, we moved forward again and transferred on June 15th. Between all the apartments and my day-to-day life, I got a wonderful break. My family and I got to meet Ryan on May 11th on one of his trips here in the US. It was awesome to meet him and spend some time getting to know him and his wife. This just made me that much more determined to help him and his wife become parents.

GOOD NEWS! Kirsten and Ryan are expecting, and we are all over the moon! The July 20th first ultrasound felt like it would never come. But there he was. A perfect little baby and we all prayed the next nine months would fly. Little did we know on August 5th at the 10-week ultrasound, we would take an even bigger crushing blow. “There’s no heartbeat”.

Even to this day, it crushes me. I had never had a miscarriage much less let so many down. You don’t realize that when you have your miscarriage it’s private. You, your partner and maybe a friend, but that’s it. But when you are a surrogate, you feel as if the world knows you failed. The IP’s, your husband, your best friend, your first surrogate family, doctors, nurses and everyone you are sharing this journey with.

Now granted, we know now what happened and there was nothing anyone could have done, but at the time it doesn’t feel like that. So you do your best to move forward, you count on your support team and trust that things happen for a reason. So here we are, back at the “Now what?” To say I was lost is an understatement. All I had was more questions and the biggest ones I had were:

But what really surprised me is what happened the next day. I finally got the courage up to message and then Skype Kirsten because, until then, my husband had been keeping everyone in the loop and doing all the hard work. I just was in a fog and couldn’t see a light at the end of this one. But what really surprised me when talking with Kirsten was that there was nothing but love and compassion.

I couldn’t understand it. Why were they not mad? Why was she worried about me? But after we chatted a bit I knew she understood what I was going through and that I had someone that 100% not only understood but was feeling the loss the same as I was. Well, the third time’s a charm, right?

YES! October 25th, Transfer Day. To say we were nervous is an understatement. But on Nov 5th we got more good news. Pregnant! And I even had three at HPT come back positive. We were off to a good start.

Now if you think it should be smooth for us from here on out after everything Ryan and Kirsten alone had been through, much less the road we had been down together, well, okay kind of a bit smoother. We were nervous at EVERY appointment and ultrasound. We drove Tonya crazy and she was wonderful to stick with us. I ended up getting gestational diabetes and postpartum preeclampsia (lucky, I know). But there was nothing I couldn’t do as long as the baby was safe and growing strong.

July 5th 2019. After days of trying EVERYTHING to go into labor, at 2 a.m. I went in to have a beautiful little boy. Now if you think it was going to be that easy, well you haven’t been paying attention. Everything was going nice and smooth when my body changed its mind and just stopped labor. Now I had to decide to go home or do Pitocin (known as Oxytocin) to get this show going. Pitocin it is.

And before we knew it, Spencer John Wilson was here. I remember looking over at his loving parents and nanny Sue and the look of love and joy through all the tears. It had a beautiful peace about it. I was lucky to have my husband and best friend Nicole by my side as well as my wonderful and compassionate doctor. I can never thank Dr. Adam Jensen in Gunnison, Utah, and his awesome staff for not only being there for me every step of this journey, but they were also there for me through my first one as well.

Now, after a few complications (because why not?) and a long night of small checkups and tests, we all went home as a new big family. I now have two beautiful families that complete my family. One in Spain and now, another in Australia. They will always be a part of me and I’m so blessed to have two sisters through motherhood. It was hard to put everything into so few words, but If you take anything from this, don’t give up. I truly believe things happen for a reason, and regardless if you ever find out the reason or not, the journey makes it worth the story. (Leigha Harris a very proud surrogate Mother). 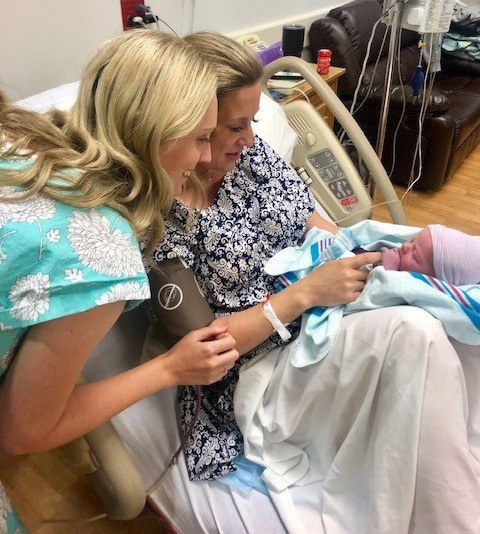 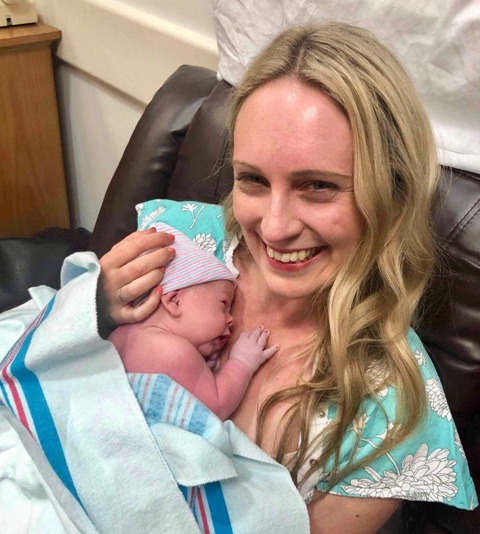 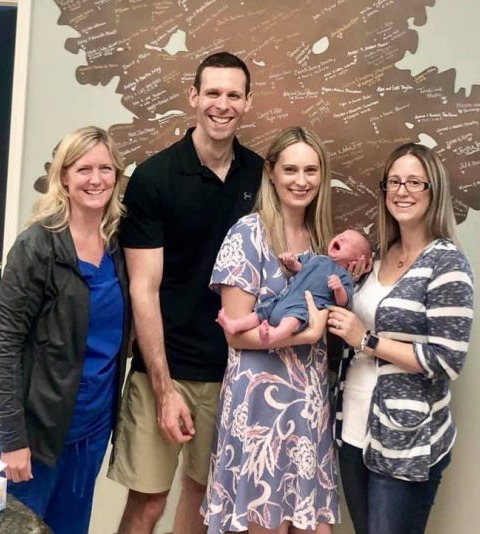